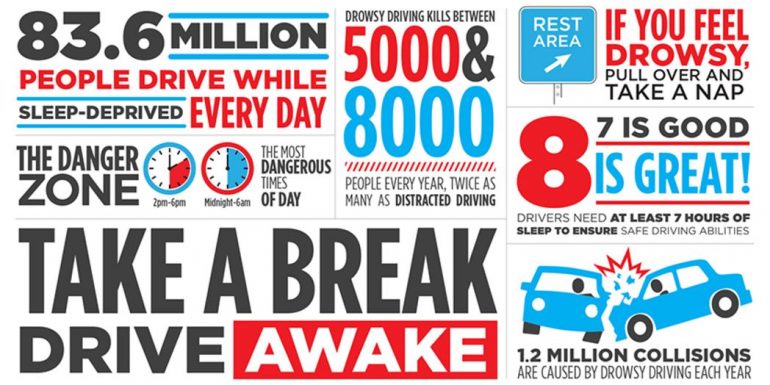 It’s nearly impossible to determine with certainty the cause of a fatal crash where drowsy driving is suspected. However, there are a number of clues at a crash scene that tell investigators that the person fell asleep at the wheel. For example, drowsy driving accidents usually involve only one vehicle where the driver is alone and the injuries tend to be serious or fatal. Also, skid marks or evidence of other evasive maneuvers are usually absent from the drowsy driving crash scene.

Unlike alcohol-related crashes, no blood, breath, or other objective test for sleepiness behind the wheel currently exists that investigators could give to a driver at the scene of a crash. This makes police training in identifying drowsiness as a crash factor very difficult.

Definitions of drowsy driving or driver fatigue rely on how the concept of “fatigue” is defined. Fatigue is a general term commonly used to describe the experience of being “sleepy,” “tired,” “drowsy,” or “exhausted.” While all of these terms have different meanings in research and clinical settings, they tend to be used interchangeably in the traffic safety and transportation fields.

There are many underlying causes of sleepiness, fatigue and drowsy driving. Including sleep loss from restriction or too little sleep, interruption or fragmented sleep; chronic sleep debt; circadian factors associated with driving patterns or work schedules; undiagnosed or untreated sleep disorders; time spent on a task; the use of sedating medications; and the consumption of alcohol when already tired. These factors have cumulative effects and a combination of any of these can greatly increase one’s risk for a fatigue-related crash.

Sleepiness or Fatigue Causes the Following:

In addition to the dangers of driving under the influence of fatigue, several states are considering legislation that would allow police to charge drowsy drivers with criminal negligence if they injure or kill someone while driving if they have not had adequate sleep.